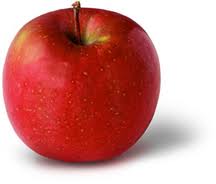 The Fuji apple was first developed in Fujisaki, Aomori, Japan in the late 1930's then was brought to market in 1962. It is a cross between two American apple varieties, the Red Delicious and old Virginia Ralls Genet (sometimes cited as "Rawls Jennet") apples. Even with its American roots, the Fuji apple owes its name to the Japanese landscape where it was developed: "FUJIsaki" and Mt. Fuji.