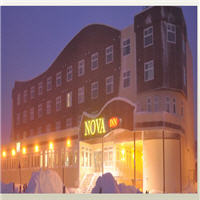 Geographical position
The territory covers about 1.9 million square kilometres of land and water including part of the mainland, most of the Arctic Islands, and all of the islands in Hudson Bay, James Bay, and Ungava Bay (including the Belcher Islands) which belonged to the Northwest Territories. This makes it the fourth largest subnational entity (statoid) in the world. Nunavut has land borders with the Northwest Territories on several islands as well as the mainland, and a tiny land border with Newfoundland and Labrador on Killiniq Island.

If Nunavut was a country, it would rank 13th in area, after the Democratic Republic of the Congo.

The creation of Nunavut created Canada's only "four corners", at the intersection of the boundaries of Nunavut, the Northwest Territories, Manitoba, and Saskatchewan, at 60°00' north, 102°00' west, on the southern shore of Kasba Lake. This is not the tourist spot it might be, as it is extremely remote and inaccessible, although there is a marker (albeit an out of date one) at the point, and some have made the trek. Some people see Nunavut's borders as forming the shape of an Inukshuk.

The highest point in Nunavut is Barbeau Peak on Ellesmere Island at a height of 2616 m (8583 ft).

Arctic tundra covers virtually all of Nunavut, the only exceptions being a tiny area in the extreme southwest near the "four corners" alluded to above, where a marginal taiga forest exists, and small zones of permanent ice caps, found on some of the larger Arctic Islands (especially Baffin, Devon and Ellesmere) at sites having a relatively high elevation.


To Compare the Products
×